The Evangelical Lutheran Church in American is one of many Lutheran churches worldwide, and is a member of the Lutheran World Federation, an organization comprised of over 75 million Lutherans in 99 countries.

The Lutheran Church traces its history to Martin Luther, a preacher and doctor of Bible who triggered the Protestant Reformation when he posted 95 Theses for academic debate in Wittenberg, Germany in October of 1517. Although Luther was a figure of towering importance, the term “Lutheran” is a bit of a misnomer. Luther was not alone; he had the help of numerous scholars and pastors in his calling to address the problems of his time and call the church back to God’s Word. What defines the Lutheran Church isn’t the figure of Martin Luther so much as the teachings of this Wittenberg movement to reform the Church, which came to be collected in the Book of Concord. At the heart of our theology is Christ Jesus, who is the revelation of a God who is merciful, gracious, and loving toward us. This Jesus strengthens our faith in every trial by showing up in the preached Word of the Gospel and the administration of the Sacraments. This powerful Word of unconditional love and favor toward us changes our self-centered focus and frees us to recognize and respond to the needs of our neighbor in love.

All are welcome at our services and events! We are a Reconciling in Christ congregation. In Christ Jesus God has reconciled the world, torn down the dividing walls of hostility, and made one new humanity (Eph 2:11-22). Through Word and Sacrament, the Holy Spirit has grafted us to Christ and his benefits, so that we too might share in this new humanity. As such, this congregation does not exclude people from full participation in the body of Christ on the basis of sexual orientation, gender identity, immigration status, or otherwise. All are welcome!

Centrally located in Tampa in the historic Seminole Heights neighborhood, St Paul Lutheran Church is across the street from Hillsborough High School on Central Avenue. Our sanctuary and steeple are visible from I-275.

Our sanctuary is liturgically “oriented” in the medieval Gothic-style with antique stained-glass windows and oak pews. This means that the sanctuary faces east toward the altar, with a north pulpit for Gospel reading and preaching, and a south lectern for Psalms, epistle readings, and other forms of proclamation. The baptismal font with open scriptures is liturgically westward, in the center of the pews. This style of worship is meant to convey the various points from which God acts for our salvation by Word and Sacrament, and that God’s action comes to us from all directions in life. This style of sanctuary also offers a picturesque look and feel for worship and weddings.

We offer a children’s playground, choir, youth group, pub theology, meditation, advocacy, service opportunities, catechism, Bible study, prayer partners, Lunch Bunch, coffee fellowship after our 10:30 a.m. service, and much more. Our Snyder Building is available for community meetings, is currently used for AA and NA meetings, and is home to “HOPE,” the Hillsborough Organization for Progress and Equality. Our congregation is generally active in neighborhood events and supports various local charities.

Organized in 1927, we are the oldest continuously operating Lutheran church in Tampa, the “Mother Church” of eleven others. Our first home was Room 303 at the YMCA building in downtown Tampa. Sixty-six people attended the first service in December of 1926. At our seventh service – in January 1927 – we were formally organized as a church.

After investigating several possible homes (and asking Peter O. Knight to donate a lot on Davis Island!), our church leaders decided in 1930 to purchase a lot in Seminole Heights, across the street from Hillsborough High School, at the corner of Wilder and Central. At the time, this 145′ X 275′ lot contained a large two-story frame farmhouse in the middle of an orange grove. 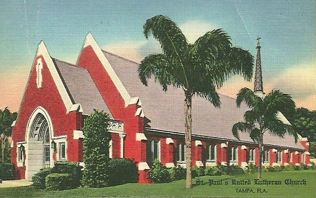 We took out a mortgage, purchased the property, and began re-modeling the house. Our first worship service at our new home was held on Pentecost Sunday, June 3, 1930. The brickwork from the front porch of that original farmhouse has been preserved behind the sanctuary.

We struggled, as did the rest of the country, during the Depression, but by 1942 we began a “Buy a Brick” campaign to raise money for a permanent church building. In addition, during the war years, St. Paul sponsored a Thursday evening social night for soldiers at the USO. By 1942, our membership had grown to 181 members.

The Building Fund campaign launched in 1943 was generously supported; and by 1946, we had purchased the lot adjoining our property. We hired an architect and by 1949 obtained bids for construction. The cornerstone for the Sanctuary was laid on January 22, 1950, as construction started. The completed building, furnished and landscaped, was dedicated September 3, 1950 at a cost of $79,889.29. The oak pews were fashioned in Hickory, North Carolina, and kneelers were later installed in the early 1980’s. Our carved oak altar, which matches the pulpit and lectern, dates back to the original design and construction of the building. 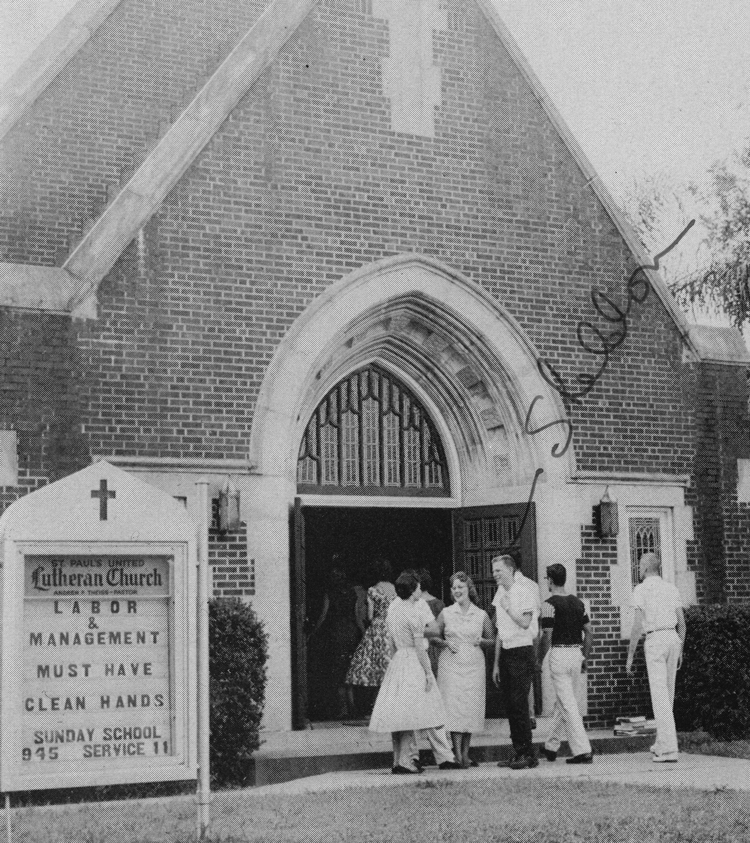 We saw our Sunday School enrollment grow to 260 people, underscoring the need for an education building. We broke ground for the Snyder Memorial Building (behind the sanctuary) on March 24, 1957. It was completed at a cost of $44,998.29.

The steeple was painted and repaired in 1960, the tenth anniversary of the sanctuary. Then, in 1988, extensive refurbishing was done in preparation for the installation of the freestanding Heissler pipe organ. A tile floor was laid in the chancel, the nave was painted, and a contrasting accent line was added. As the organ was installed, the altar was moved further away from the rear wall and now occupies a central position in the chancel.

St. Paul celebrated its 50th anniversary in 1977. By this time we had a stong history in Seminole Heights. In the 1980’s we ran a day care center, and continue to serve our community by allowing our buildings to be used by many groups – for example, neighborhood organizations, other church groups, Boy Scouts and Narcotics Anonymous groups. We have been a precinct-polling place since 1978, and are proud to be one of the founding churches of Metropolitan Ministries. 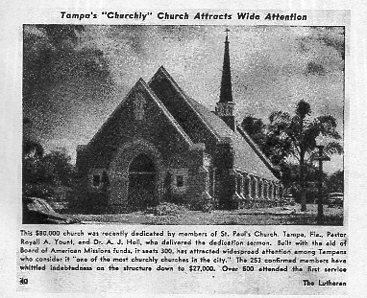 The antique stained glass windows in the nave were cleaned, restored and re-leaded in 2002. The window colors of red, blue, green, gold and purple are liturgical colors of the church year. The Trinity stained glass windows, high in the east wall, carry the Christian symbolism of Alpha and Omega, the beginning and the ending of the Greek alphabet.

In 2010 we designed, planted and dedicated a Memorial Garden. It is a beautifully landscaped private area in the back with an outdoor lectern, benches and room for remembrance plaques. Also, in 2010 we installed in our sanctuary an Allen Renaissance digital computer organ with oak cabinets and a façade of gold tone organ pipes. We love the new look of our chancel area!